The Beacon Hill North area, east of downtown, has some great examples of MCM houses.
The two main builders in Beacon Hill were Minto and Campeau. For the most part, the Minto-built homes are in the centre of the community (in an area that was also marketed as Beaconwood), and the Campeau-built homes act as book-ends on the western and eastern sides. Simpson Homes also built a handful of large houses in the northwest portion. In addition, there are a few pockets of houses built by other builders, including MacDonald Homes, as a part of the H.O.M.E. Plan (Home Ownership Made Easy) – particularly on the east side.
The Campeau houses in the southwest portion of the area were marketed as being in Rothwell Village, due to their location bordering Rothwell Heights. The houses built in this area were Campeau’s larger two-storey and split-level models.

Campeau also built condominium townhouses in the Rothwell Ridge complex and nearby Beacon Heights. All of the houses in these complexes are based on just 2 plans - a 3 bedroom and a 4 bedroom version. 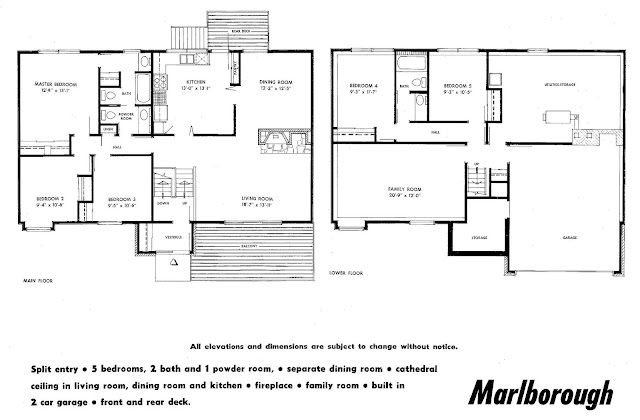 The area to the southeast is considered Beaconwood, and has a series of complexes with condominium and rental townhouses and apartments. One of the complexes is Loyola Court featuring Campeau’s uniquely designed Court Homes. These designs were also built in South Keys, Beaverbrook, Blossom Park and Beacon Hill South.
Generally, the houses built by Minto have more modern exterior designs, while those by Campeau tend to be more traditional. Below are a few examples of my favourite MCM Minto designs and some of the less traditional Campeau designs. 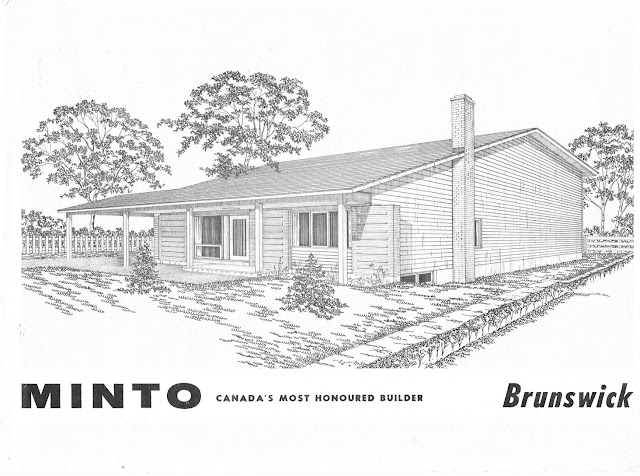 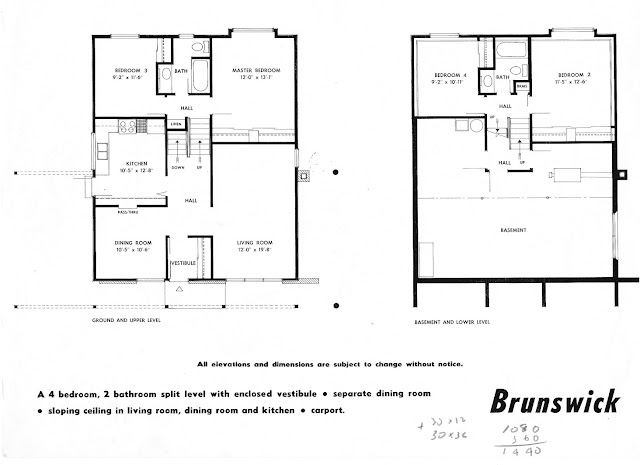 During the 1960s, "Chatelaine Design Homes" were built in cities across Canada to showcase the newest in housing design and décor, and were published in Chatelaine Magazine. In 1966, Campeau Construction designed and built the Ottawa Chatelaine home in Playfair Park. That same year they also released a smaller version of the design home which could be built in some of their subdivisions – including Beacon Hill. 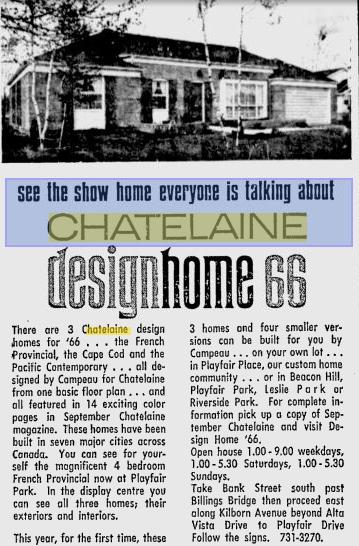 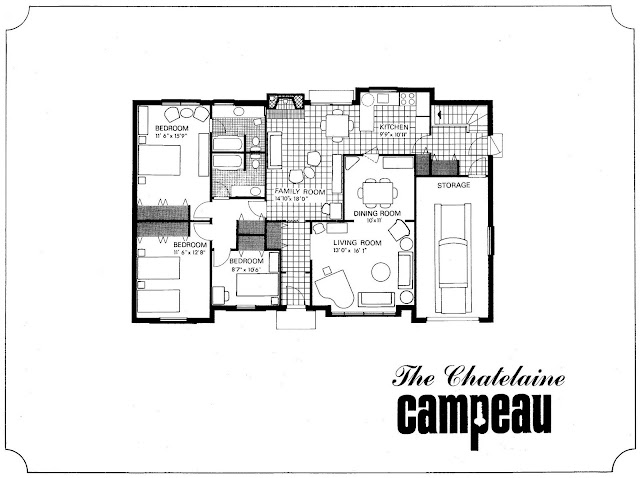 In 1968, the Whitburn design by Campeau was given a Chatelaine Design award, and the house was on display in Beacon Hill. 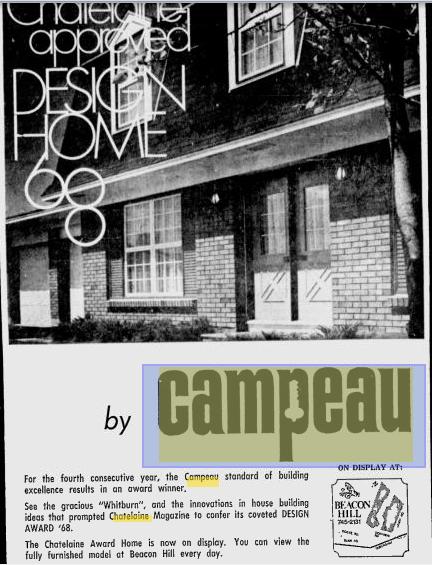 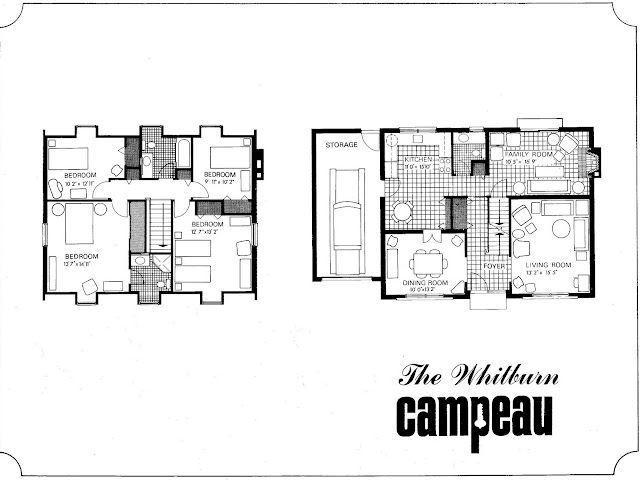 By Request, here is the Campeau Lynhaven plan! 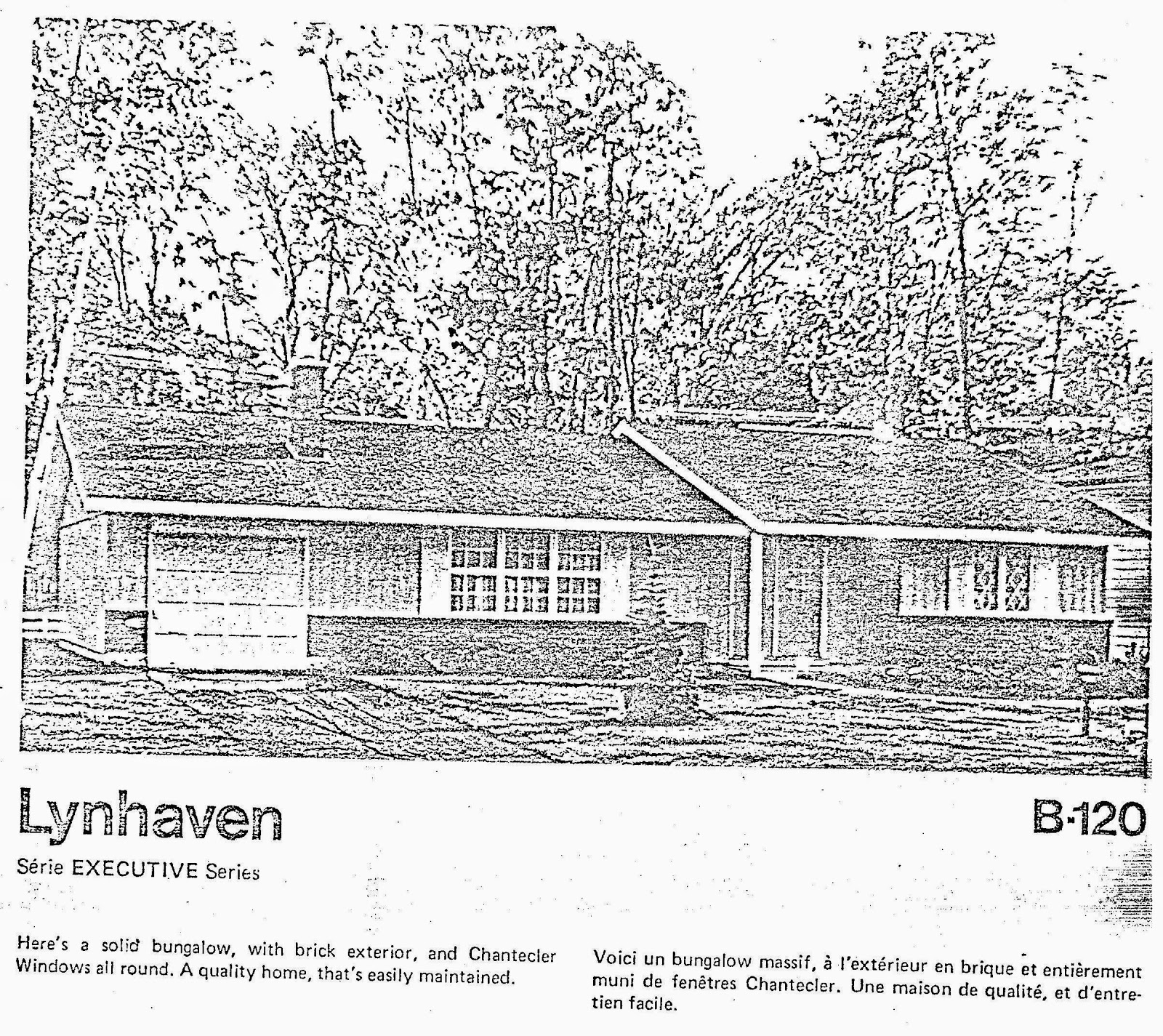 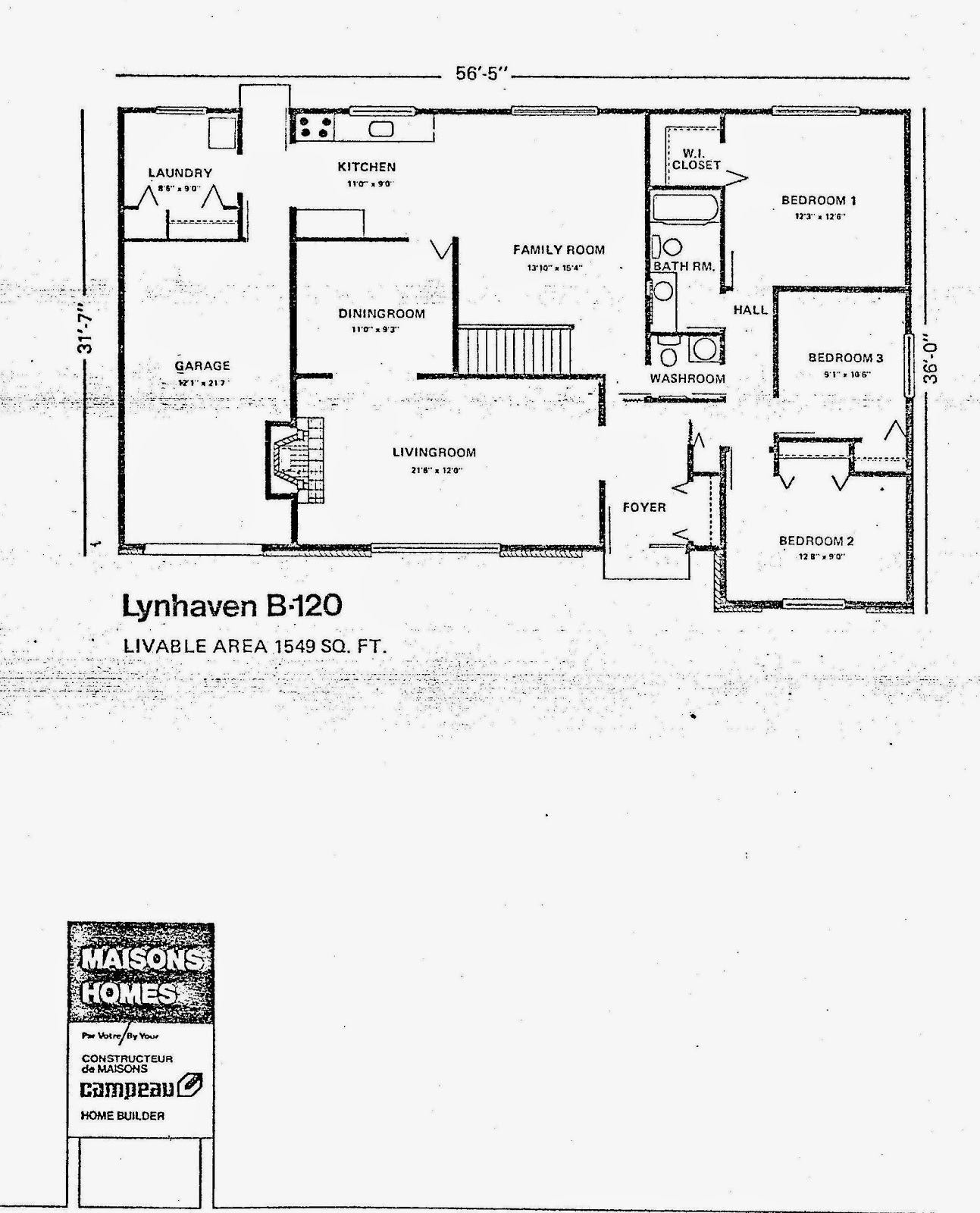 As per a reader's comment, below is the Campeau Hollyburn plan 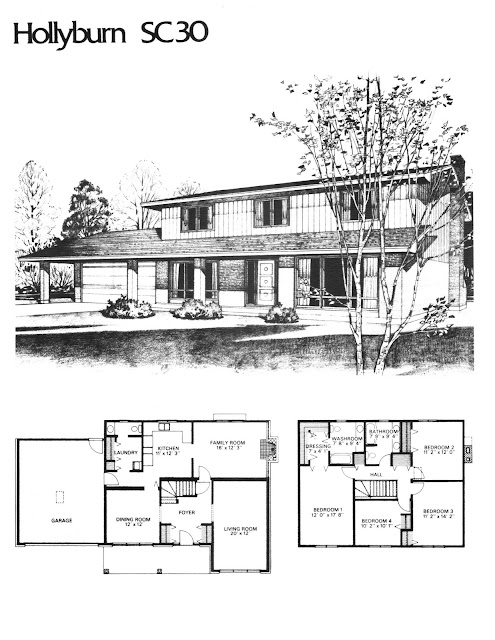 One of the biggest builders in Ottawa during the 1950s and 1960s was Campeau Construction, a name still known today, even though the builder is no longer active. Many of the houses in Alta Vista were custom built, but Campeau was one of the first builders to construct tract homes in the area. Beginning in the 1950s Campeau began building houses southwest of Kilborn Avenue and Alta Vista Drive, north of Randall Avenue. At the time, bungalows and one-and-a-half storey houses were most popular. Many of the “Victory Houses” built by Wartime Housing Ltd. for returning veterans after WWII were one-and-a-half stories, and the style soon became very popular for all builders. Below are some of Campeau's one-and-a-half storey plans built in the area:


With time, the one-and-a-half storey house became less popular, and bungalows and split-level houses became the norm. An easy way to determine the age of houses on a street in Alta Vista is to look at the style of the houses. If there are many on…
44 comments
Read more

Some of my long-time readers may remember that I did a series of posts on Costain a few years ago. For some reason, a few of my older posts have vanished from my blog - for reasons unknown to me. So, I have re-created this post on the builder Costain due to interest from some of my readers. On the positive side, I have been able to get my hot little paws on some new floor plans and marketing material, so there is more material in this post compared to the original (now lost) post!
In the mid-1960s the builder Costain (originally from England, but with an impressive global portfolio) came to Ottawa to develop a new hamlet in the eastern greenbelt called Blackburn Hamlet.

Throughout the mid-century, the Mansard roof was popular in Ottawa housing design.
First popularised in France during the 17th century, and then revived in the 19th century, the roof style re-appeared in Ottawa during the 1960s. At first the roof was used on historically-inspired houses, but was eventually altered in a variety of ways to have a more modern take on tradition.
Campeau was the builder who used the roof the most in the mid-century, but other builders also followed suit. A traditional use of the Mansard roof. Playfair Park North/South, Russell Heights, c. 1965. This plan had a traditional Mansard option as well as 2 Dutch Colonial options with a Gambrel roof. Beacon Hill and South Keys, c. 1967.


Here is a great example of a modern take on the Mansard roof. Instead of protruding dormer windows with arched tops, these houses have an inset window and an asymmetrical facade. From the side, the roof actually has more of a Gambrel-style silhouette.
These unique courtyard houses were …
1 comment
Read more

Below is a collection of floor plans that Campeau built in the late 1950s and early 1960s.
I quite like the first plan with its blank front facade to the right of the front door. It gives the house a modern take on the Cape Cod-inspired 1 1/2 story style. I do not believe that many of this design were built, though.

I also quite like this design below, with its blank facade and large wall of windows in the Living Room. Too bad my only copy of the plan is cut off at the top.

There are so many interesting plans that were available through the CMHC, so this is only the first posting with some of my favourites.
If you recognise any of these designs that have been built in Ottawa (or elsewhere in Canada), please feel free to share the location with me!
I have always been a fan of the butterfly roof!


Although there are no front facing windows on the above design, the cedar shake cladding makes for a very interesting facade. The architect was based out of Kanata, and I could easily see this house fitting into the natural landscape of Beaverbrook - although I don't think it was actually built there.
The central atrium hints at the E…
Post a Comment
Read more

California spearheaded the popularity of the bungalow (or ranch home), in mid-century North America. In California, basements are rare. During WWII and immediately afterward, some Ottawa houses were built without basements to save costs. But, the appeal of having a basement as extra room for storage and expansion space, meant that the basementless house did not last long.

During the mid-century era, California became the epicentre of modern design. From the architect-designed case-study houses, to the mundane tract house, all eyes were on California. In Canada, books and periodicals on architecture filled with Californian design would have sparked the imagination of Architects and designers.

When one thinks of Mid-Century Modern (MCM) California tract housing, the name ‘Eichler’ often comes to mind. Perhaps one of the most famous MCM tract builders, Joseph Eichler, defined MCM design in the United States. His widely-published designs even captured the imagination of Canadians. Any designer/architect in the know would have seen an Eichler plan. In Ottawa, there are a few examples of houses built in the 1960s with floor plans that could have been influenced by those being built by Eichler. The most famous Eichler-built designs are those with an open-air atrium at the centre.
One of the floor plans built by Teron in Beaverbrook during the 1960s features wha…
7 comments
Read more

Another blog post by request! Located south of Hazeldean Road east of Stittsville Main Street is a very special "adult-lifestyle" neighbourhood begun in the late 1970s. The original phases of Amberwood Village consist of a series of houses built in clusters along the edges of the Amberwood Golf Course. The development was originally built by a company called Jaric Developments Ltd. The architect of this original portion of the area was W.G.Mohaupt - who also designed the "courtyard singles" in Hunt Club (see my old post Favourite Plans South and scroll down to see these designs) - and also used to design houses for Minto. The clusters of attached houses are grouped on dead-end lanes and units are attached is a variety of arrangements. Some designs have an attached garage, while others have detached garages clustered together with others. The result is a very interesting streetscape with a lot of open space between units. Image courtesy of Google Maps.
Some phases of the…
1 comment
Read more

Do you love MCM design, but are looking for a condominium apartment to call home? Ottawa has a good selection of MCM buildings where your Eames chair will feel at home.


While some may find the plain exteriors of many MCM condos too severe, they usually have very spacious units inside - especially compare to the tiny condos built today. The simplicity of some of the plans may seem boring, but upon closer inspection, the well-proportioned rooms and abundance of natural light is quite appealing.


MCM condo apartments were built in the later half of the period, as the first ever high-rise condo building in Canada was built in 1967. The Horizon House is located in Ottawa, and was built by Minto in Parkwood Hills. There were buildings built earlier in the mid-century, but they are rental apartment buildings. This particular posting will focus only on condo buildings.

A few years ago, while completing my Master’s Degree, I wrote a paper on how the car changed the suburban house. I subsequently turned it into a lecture taught to Urban Planning students, and have now adapted that same research piece for this blog.


Living in the suburbs and owning a car have gone hand in hand ever since the advent of the automobile suburb. The two coexisted comfortably, until a turning point when the shelter for the car (the garage) became so important, that it negatively impacted the design of the shelter for people (the house). To show this change, I will start with housing built early in the mid-century.

During WWII, and for a while afterward, “Victory Houses” were built for returning veterans as a means of affordable yet comfortable housing. These straightforward houses were usually 1 1/2 stories and had an almost square footprint. In Ottawa, the area south of Carling Avenue, between Fisher and Merivale is an excellent example of such housing. To cut costs the hous…
2 comments
Read more